04 Nights at the hotel with breakfast
Return Dubai airport transfers
Desert safari with BBQ dinner, belly dance, tanoora show and many more activities.
Dhow cruise with buffet dinner
Burj Khalifa tour with return transfers (124th Floor, Non-prime time slot)
Inclusive of All applicable taxes Except Tourism Dirham; guest has to pay the same on time of check in or either at the time of check out.
All tours and transfers on SIC basis
UAE VISA (single entry) 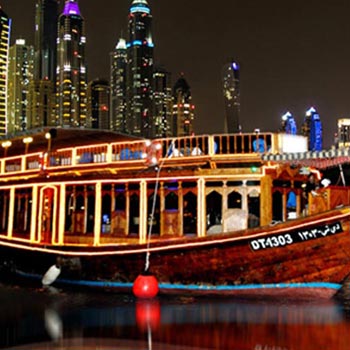 Dubai is the city of wonder, it is the city of shimmer, and it is definitely the city of everything extravagant! On your arrival at the Dubai International Airport, we will transfer you to your city-centre hotel. Check into your room. Once you've checked in, you have the whole day at leisure. In the evening we will proceed for Dhow Cruise at Marina with Dinner. Relax over dinner and admire the illuminated sights of Dubai Marina on this 2-hour cruise aboard an elegant ‘dhow’ — a traditional Arabian boat. Be welcomed onto the gorgeous wooden craft and savor a scrumptious buffet dinner on deck or in the panoramic cabin as you sail around the marina. Drink in the views of the surrounding skyscrapers and landmarks, all beautifully lit up against the night sky; and enjoy a dazzling ‘tanoura’ performance of whirling-dervish style dance as you eat, adding an extra touch of magic to the occasion. Overnight stay at the hotel
Meals : Dinner
Day 2: 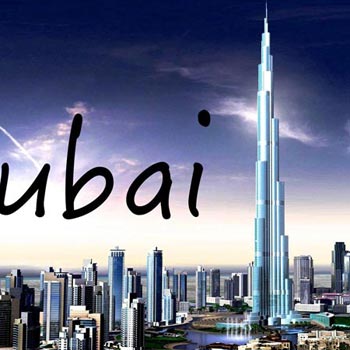 After breakfast proceed for a city tour of Dubai-Walk through the square-shaped Al Fahidi Fort to take a tour of the 18th century Dubai Museum that still gracefully exhibits the history and culture of the region. Built entirely of white stone in the medieval Fatimid tradition, the Jumeirah Mosque takes pride in its grand mix of Islamic and modern architecture, intricate artistry and with the onset of dusk, its real beauty gets highlighted. A symbol of modern Dubai, Burj Al Arab is one stunning masterpiece which has been repeatedly voted the world's most luxurious hotel. This distinctive sail-shaped magnificent destination is known for its finest services and facilities. While in the Palm Island, one gets to admire the most scenic artificial island on the earth along with incredible beaches, superb water-sport activities, world-class accommodations and dining options. Catch a glimpse of the Atlantis Hotel, the impressive focal point of Palm Jumeirah, a striking man-made island. This lavish marine-themed resort is at the pinnacle of luxury combining style with elegance. The Mall of Emirates provides the finest in dining, shopping and entertainment along with an amazing wintry experience in Ski Dubai, the first indoor ski resort in the Middle East. In addition to incredible shopping and dining options, Dubai Mall awe-inspires visitors with its aquarium which is famed for being the biggest of its kind in the world. Towering at a height of 828m, Burj Khalifa, the tallest artificial building in the world, stands to the amazement of millions with its fine architecture and superb design. After your city tour, you can explore Dubai on your own. Overnight stay at the hotel.
Meals : Breakfast
Day 3: 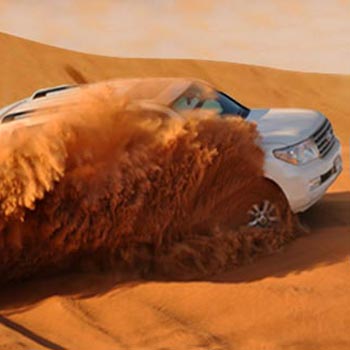 Have breakfast at your hotel and enjoy your day. In the afternoon we shall take you for a Desert safari experience The Red Dune Desert Safari is indubitably a not-to-be-missed experience that leaves one marveling at the spectacular sunset vista alongside enjoying dune bashing in the Al Lahbab Desert, camel rides, henna tattooing, sand boarding, Falcon photography, Quad biking, entertainment shows like Tanura and belly dancing. Unlimited refreshments with alcohol are served to keep the ongoing spirit high. Traditional BBQ dinner with vegetarian and non-vegetarian delights complete the ecstasy. The dunes are explored in a 4X4 vehicle. After dinner we drive back to the back to the city. Overnight stay at the hotel. (Shisha smoking facility is available at the camps, Quad biking and alcohol are available on prior request and surcharge)
Meals : Breakfast and Dinner
Day 4: 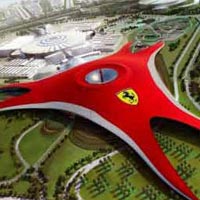 After breakfast, you have the entire day for yourself or select our optional tour of Abu Dhabi City tour & Ferrari world or Aqua venture & Lost chambers. Abu Dhabi is the largest of the seven Emirates and the Federal capital of the United Arab Emirates. A well planned modern city with several high-rise buildings, impressive palaces, beautiful corniches and architectural mosques. Visit Sheikh Zayed Grand Mosque the most imposing religious and national landmark in Abu Dhabi to date. Then a panoramic tour of the Emirates Palace, President's Palace, the Old Fort, built in the late 19th century, making it the oldest buildings in town. After complete Abu Dhabi City Tour you will visit the astounding Ferrari World theme park. Covering an area in excess of 2 lakh sq m, it is the biggest indoor theme park in the world. One of the main attractions is the Formula Rossa. At speeds of almost 240 kmph, it is the fastest roller coaster in the world. Aqua venture Dubai is set in Atlantis,with 42 acres of overflowing fun including Master Blasters, speed slide, rivers, rapids, Splashers children, play area, lush tropical landscapes and a private beach. Imagine exploring the mysterious ruins of Atlantis, lost for thousands of years deep beneath the sea. Now picture looking up to see 65,000 marine animals swimming in placid waters. Visitors can live out their own Atlantean adventure in The Lost Chambers, maze of underwater halls and tunnels. Overnight stay at the hotel
Meals : Breakfast
Day 5: 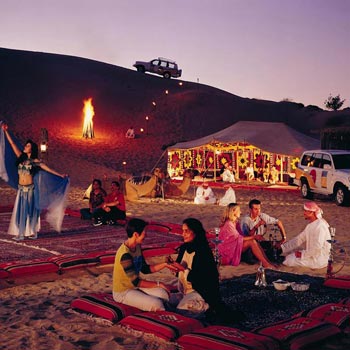 This day marks the end of a fabulous vacation to Dubai. Rise to a charming morning in Dubai and indulge in a mouth-watering breakfast at your hotel, check out from your hotel (check-out time is 1200 hours) before you head to the airport for your flight back home.
Meals : Breakfast